Johnny Bluestone and his female backing group, The Sapphires, are at the latest rock sensation in the late 1960's churning out hits at will. But their future plans are shattered with the conscription of Johnny and the likelihood he will serve in Vietnam. 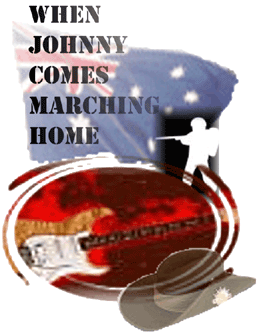 Always able to make the most of negative situation, the group's manager Brian, a fan of the musical Bye Bye Birdie arranges that Johnnie will propose to his girl friend Sue at a farewell concert and they will be married at a welcome-home concert on his return from duty. Both concerts will be telecast via an exclusive deal which alienates the media magnate Sir Jeffery Murker, who owns a rival channel, and who also has a son serving in the war Sir Jeffery undertakes a smear campaign and we are left to wonder if the rumours concerning Johnny are true. Meanwhile at home, The Sapphires have disintegrated and all have their own reasons not to reform the group on Johnny's return. Pressures mount and Johnny's return proves to be disastrous when he is the victim of a double cross from one of his friends. But which one? All is revealed with a clever twist at the end.

When Johnny Comes Marching Home has great rock 'n roll music and the story reflects the time in which it is set. It is a great mix of comedy and moments of sadness.