'"I just loved this play - So simple and so naturally performed" (Adjudicator, Ararat Festival)'

GATE is based on the Peter Carstairs award winning short film by the same name.  Gus and Willi are middle-aged shearers while Dave is a privately educated lad from the city.  Willi arrives at morning smoko annoyed that he has spent most of the morning chasing sheep that have escaped through an open gate.  Who has left that gate open?  Perhaps it was Dave who lives in the shearers quarters.  Dave vehemently denies leaving any gate open.  Was it him?  Gus certainly thinks so, given Dave's chequered history in farming matters.  But the question we will all be asking at the end is whether the gate was even left open in the first place.  A great little award winning comedy by an award winning author.

Written by Peter Carstairs (with additional script by Rob Smith) 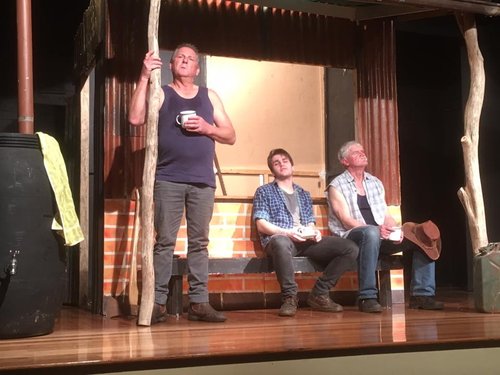