'The audience loved it!' 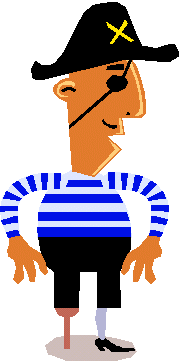 Pirates, Parrots and Penguins is a pantomime style musical in three acts. It is a rollicking tale of the sea, of love, and of a crusty old pirate and his crew. The story opens with Captain Chook and his trusty pets, Bono the Parrot and Goldstein the Penguin, set adrift on a raft after the mutiny of his crew and the evil Cambridge. By chance the raft drifts back into the path of his old ship, Chook boards, wins back his crew and casts Cambridge adrift in turn. In his absence, Cambridge has captured the Princess of Tasmania, Aphrodite, her servant Gwen and her brother, Barry.

Chook resolves to carry out Cambridge's plan to ransom Aphrodite to her betrothed. He doesn't reckon on the love match which occurs between her and Jack Tar, one of his crew.

The crew are ordered to keep the lovers apart, but of course love always finds a way, much to the disgust of Chook. Barry, who does nothing but fish and eat apples, catches an aggressive Leopard Seal that has been hunting penguins. The Leopard Seal's Song, 'I Like Penguins' is a show stopper.

Chook is challenged by Gwen and his crew about his life of violence and the pursuit of gold. Has he ever known love? He recollects a girl from his distant past with whom he dallied for a brief moment, but alas, they were parted. You may have guessed that the girl was indeed a youthful Gwen. Chook immediately becomes a sentimental old softie.

Cambridge, the Leopard Seal and some Piratical Penguins make one last attempt to retake the ship but are repulsed, and we sail on to a happy ending. This is a wonderful play for great colouful costumes, lots of scope for boys dressed as pirates to make loud 'Aaaaaagh' noises, have sword-fights and for everyone to sing some great songs.

Script and music by Mark Clark